up the creek to the shack in the woods...


Hello friends!
Before we take the drive to the shack (aka: Juniebird House)
I wanted to share a couple arrangements of flowers from my garden.
The garden has struggled a little this year from aphids and spider mites
so I haven't had a lot of flower photos to share with you,
but fall is on the way and the garden always makes a little comeback, so I'm
hoping to have a few to share later.

I haven't had anything much going on that has been blog-worthy so there's been
a lot of silence from me all summer.

2014 and 2015 were very rough years with our sweet boy Landon.
(for those who haven't read here before, Landon was born with Angelman Syndrome)
We were so worried about him and we had some decisions to make concerning
his seizure medications. He was always sick and having so many seizures
a day that it was affecting every aspect of our lives.
We changed neurologists to one that was
closer and she talked to us about adjusting his meds and adding a new
drug to the many he was already taking. Adding yet another drug to the several
he was on for his condition was hard decision for us. We worried if it would help
or make things even worse than they were.
The seizure med he is on and has been through most of his life was not
doing the job anymore. Being on it for so many years had caused his
platelet count to become seriously low at 56 and a suppressed immune system,
so a decision had to be made and quick.
We made the change and the past seven months have been so much better.
We are hoping that his immune system and platelet count will continue to improve
and our sweet Landon won't catch as many viruses.
When he gets sick, he gets real sick!
I really wanted to explain why the blog has suffered and why I haven't
been good at keeping up with any of you.
I find Instagram to be so much easier to post just one pic every other day or so,
but I still love blogging too, just have had no time to do it.
I haven't been keeping up with
so many things around here, and now I have a lot of hope that
things are going to be great. 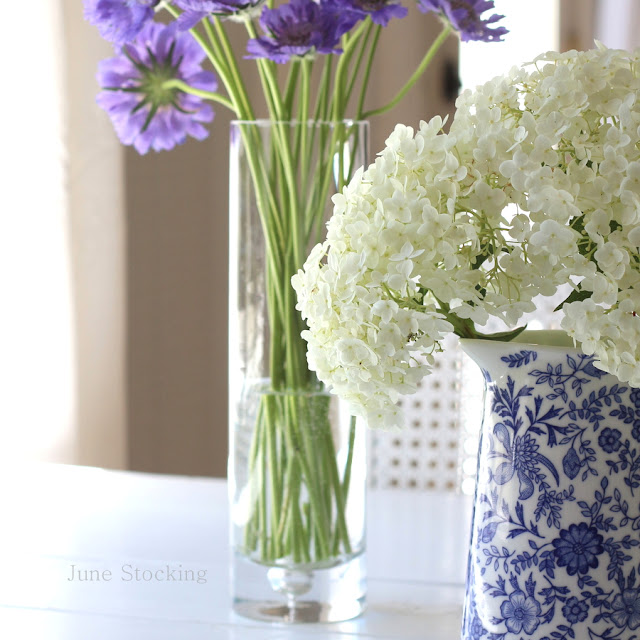 An Annabelle hydrangea bloom and a few deep blue scabiosa. 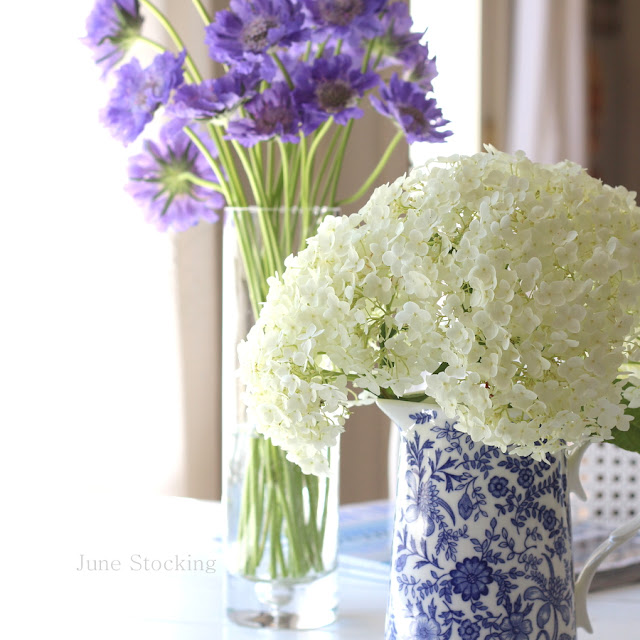 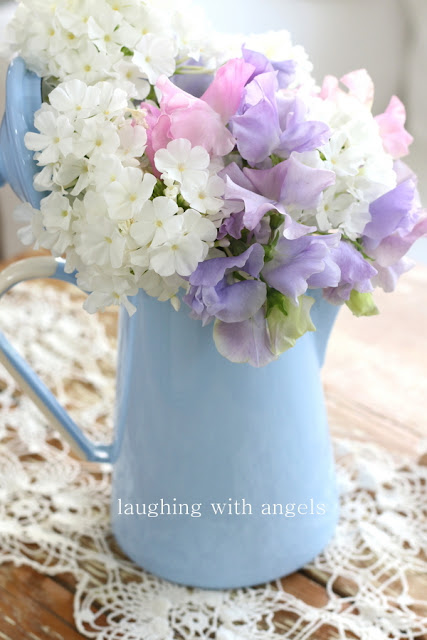 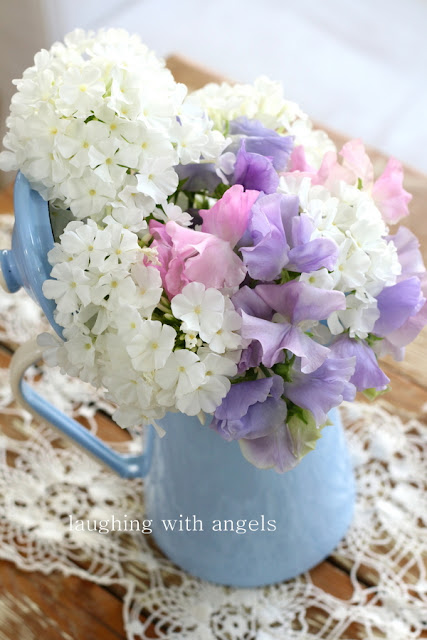 So,
do you remember that I have this little shack in the woods on some property
we have in the mountains?
I have posted about it here before, and one other time. I didn't bother
looking up the link for that one because the photos are horrible quality. It's a difficult little
place to photograph because of it's teeny size and poor lighting.

I liked the way I had it decorated, but I was in for a change since
it was decorated in neutrals the same as my home.
I felt like a little more color to the decor was in order for the little shack!
It is painted barn red on the outside so it stands out better in the winter
with all the snow we get up here.
First I painted the walls a bright white
so the colors would really pop, and then kept most of the yard sale
furniture I already had up there. I don't decorate up there with
anything 'cool' because this is miles from town and anyone could
break in and take anything they wanted.
My husband brought the bed home
from the landfill years ago when they still allowed people to do that, and
everything else is yard sale and thrift store stuff. Things have come and gone
and made their way into my house or studio and now I have left the space a little less
cluttered than it has been in the past. 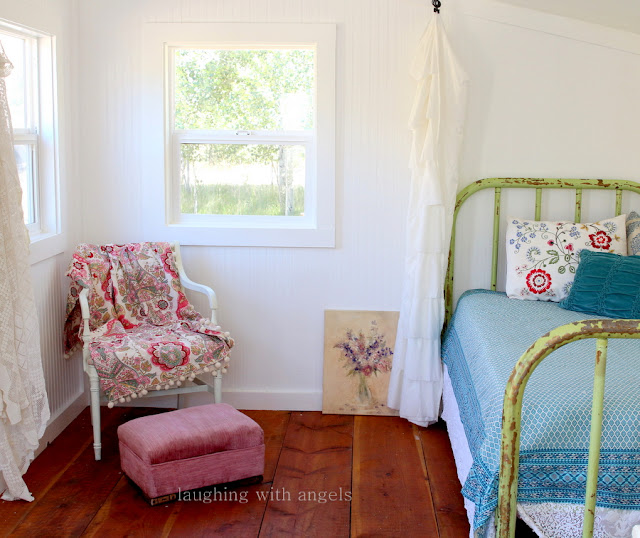 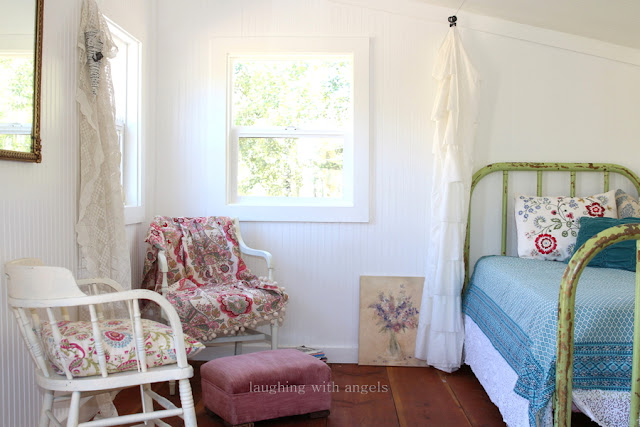 I haven't put any curtains up yet and still looking for some that will work here and let
me have a little privacy when I come to stay.
I have only stayed here overnight once this year, and my husband and
Landon were in the camper nearby.
I didn't like the fact that the windows were bare and always felt like someone
was looking in. It could have been one of our horses ( I think I already told that story
in one of the posts I wrote about the shack)
but I still still didn't want someone or something watching me sleep, so
I pulled that little curtain I have hanging by the bed and played solitaire on my phone
until I fell asleep. 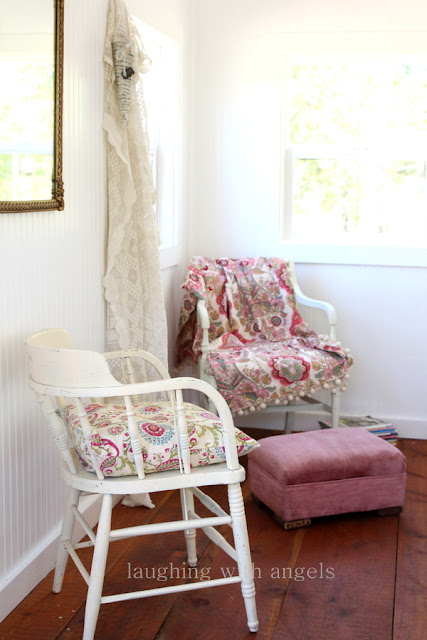 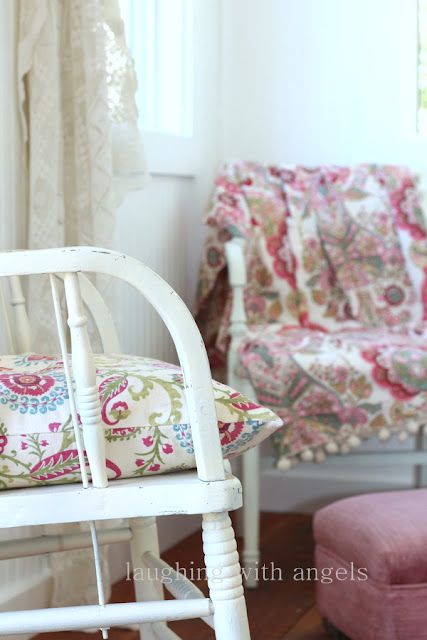 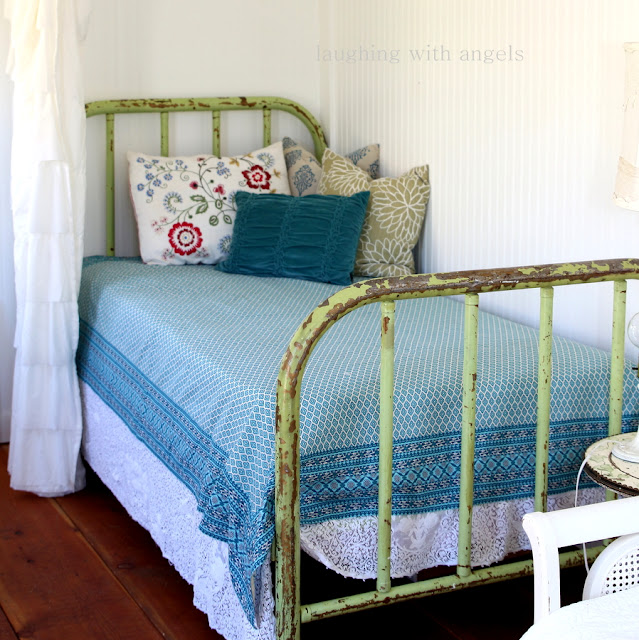 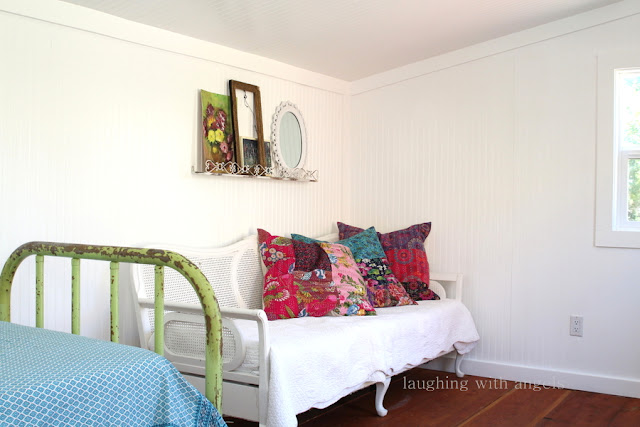 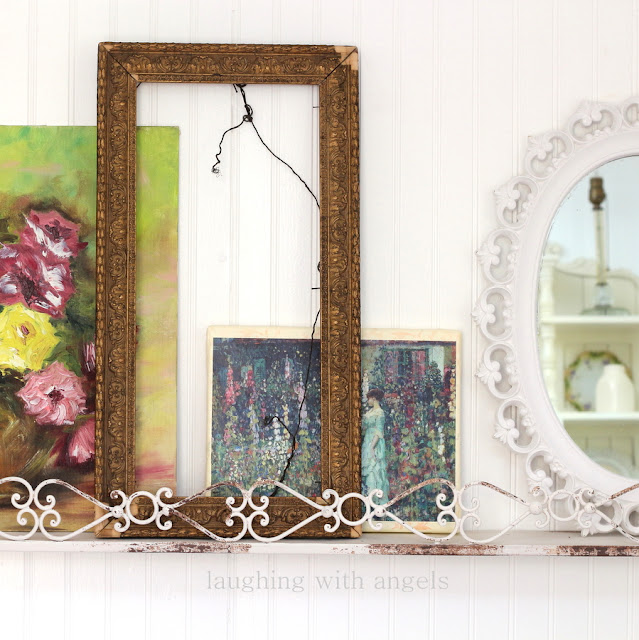 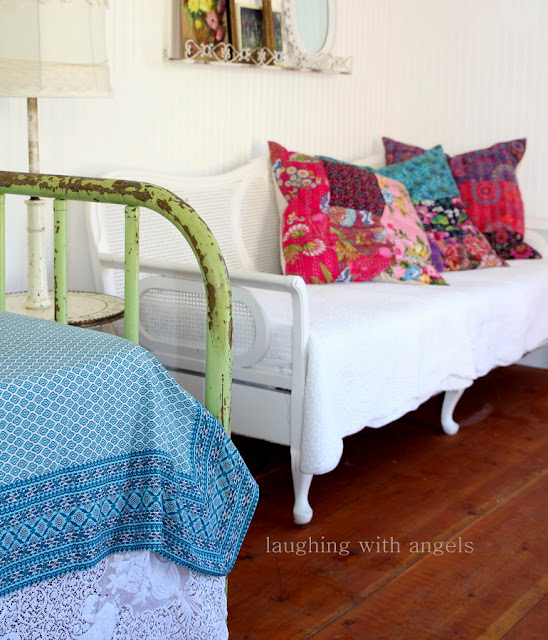 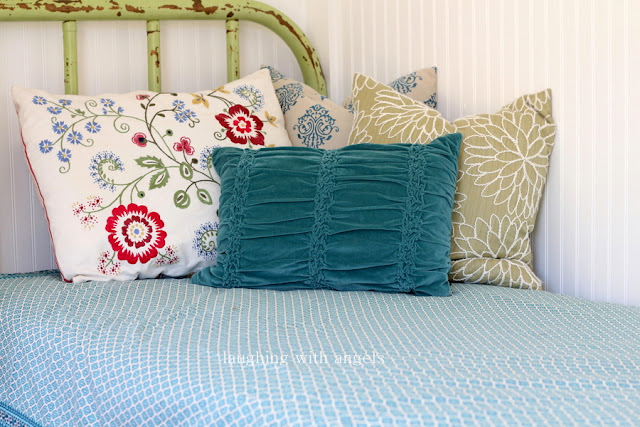 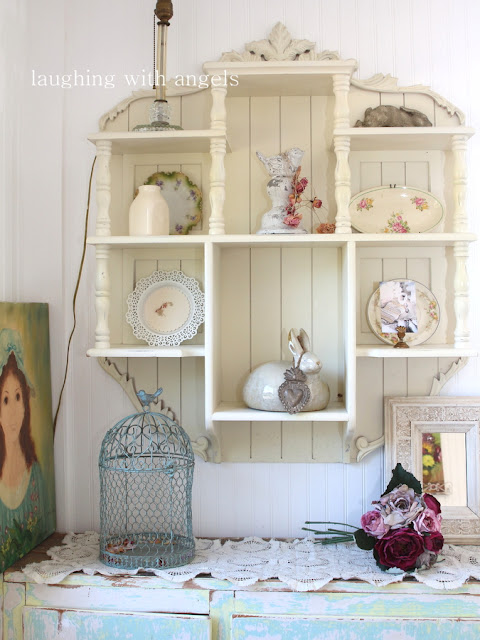 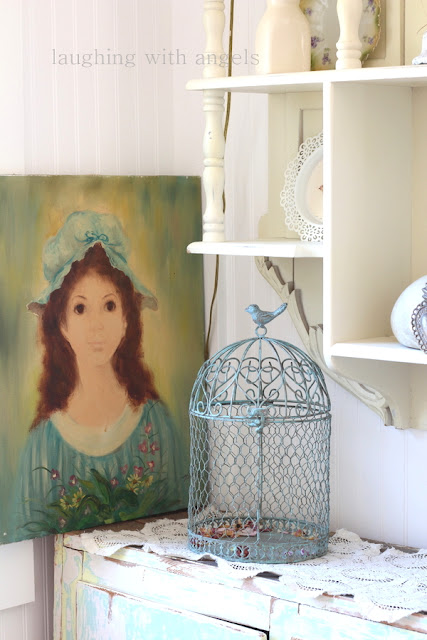 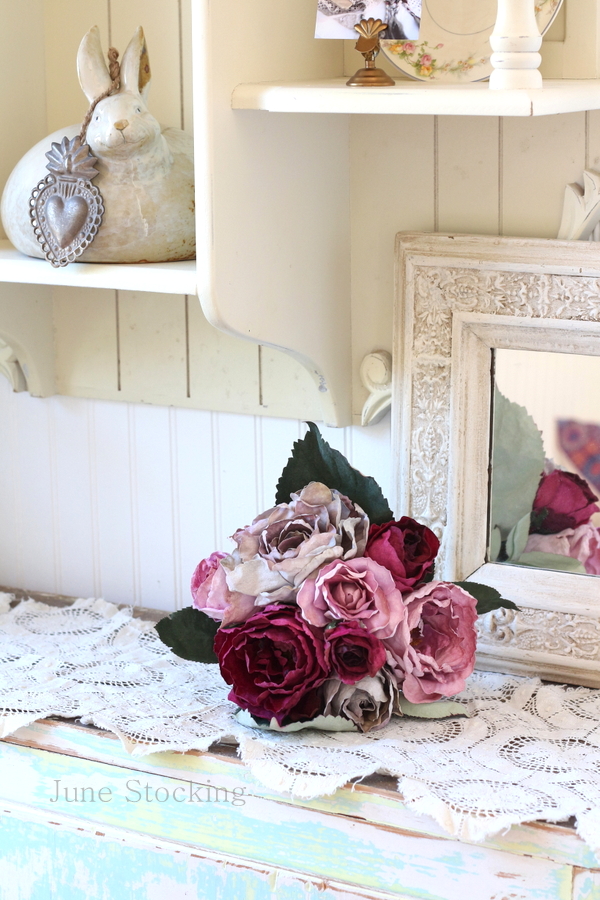 Thank you to all that follow and read here!
sending hugs to all of you! 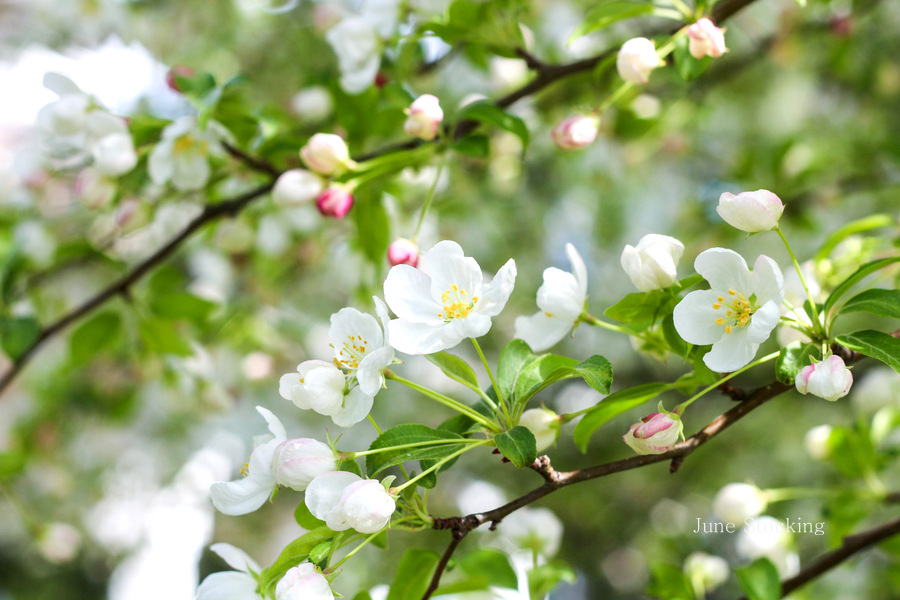 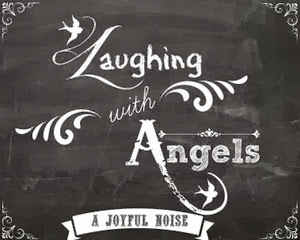 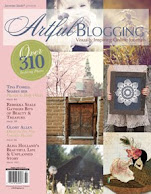 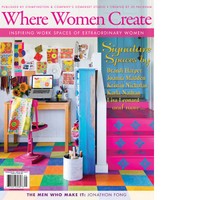 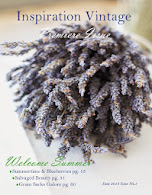 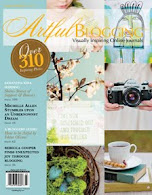 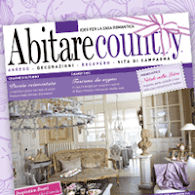